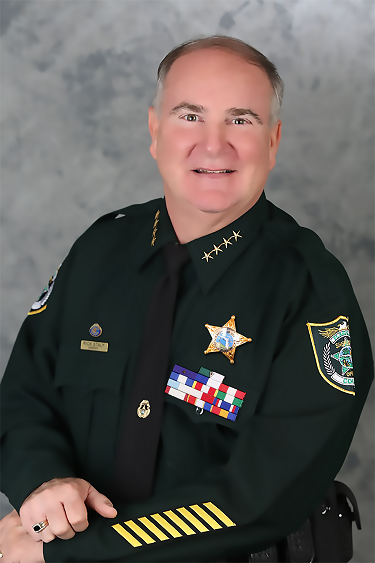 Sheriff Rick Staly, formerly the Undersheriff of the Flagler County Sheriff’s Office, was elected in November 2016 after a spirited campaign that saw eight challengers vying to become Flagler's next Sheriff.  Sheriff Staly was sworn-in as Flagler County's 18th Sheriff on January 3, 2017.  For the first time in sixteen years, Flagler County had a Florida certified law enforcement officer as the top cop in the Sheriff's seat.

Sheriff Staly’s experience in law enforcement spans four decades, having served in municipal policing for three years with the Oviedo and Altamonte Springs police departments before joining the Orange County Sheriff’s Office as a Deputy Sheriff in 1977.  Staly retired from Orange County in 2001 where he had served as Undersheriff for six years but continued to serve as a Reserve Deputy Sheriff with the Seminole County Sheriff’s Office.  Sheriff Staly moved to Flagler County in 2006 and was a Senior Vice President for Ginn Development Company responsible for security operations in five states and the Bahamas.  He later owned his own private security business based in Palm Coast.  After selling his business in 2012, he accepted a position with the Flagler County Sheriff’s Office and served as Undersheriff for two-years.  Sheriff Staly graduated from the 177th Session, FBI National Academy and was awarded life membership in the National Sheriff's Association, International Association of Chiefs of Police, Florida Police Chiefs Association and the Southern Police Institute Alumni Association. He was a life member of the National Rifle Association (NRA).  He is also the first Sheriff in Flagler County to graduate from the National Sheriff's Institute. Early in his career, he was shot three times while saving the life of a fellow Orange County deputy.  He received the Agency's Medal of Valor and Purple Heart medals for his actions and was awarded the Governor's Medal of Heroism.  Sheriff Staly would bring both government and business experience to the Flagler County Sheriff's Office.

Upon taking office as Flagler County's 18th Sheriff he reorganized the agency. Sheriff Staly created the Community Policing Division and implemented district policing by creating three districts to serve the distinct and unique parts of Flagler County.  Sheriff Staly also created the Agency's first Youth Services Section to focus on the needs of the community's growing youth population.  In partnership with the Flagler County School District, after school sports for middle school students was implemented through the Flagler Sheriff's Police Athletic League program to provide crime prevention through sports. A Criminal Justice Academy in both Flagler-Palm Coast and Matanzas high schools was developed with implementation in a future school year.

Sheriff Staly also reorganized the Detention Division creating the Court and Detention Services Division.  As part of this division he created an Offender Rehabilitation and Inmate Services Unit, believing that if you can teach a trade or help an inmate earn a high school diploma or provide counseling and treatment for addiction or anger issues, they could become productive members of the community and not return to jail.  In addition, for the first time in history, the jail provided 24-hour inmate medical services.  This was done by contracting services with a private medical company to reduce liability and control inmate medical costs.  Under the leadership of Sheriff Staly, the Detention Section started the accreditation process for the county jail.  For the first time in the history of the Flagler County Sheriff's Office the Detention facility will be a state accredited facility.  Finally, an Inmate Work Program was started where inmates would perform maintenance and landscaping work at public facilities and roadways under the watchful eye of a Detention Deputy.  Inmates also filled sand bags for the public as the community prepared for Hurricane Irma's landfall in 2017.

Sheriff Staly also started the agency's first dedicated Fugitive Unit and a weekly social media initiative known as "Fugitive Friday Bingo" where he asked the community to provide tips on the location of a wanted fugitive "who's number was up."

The Agency’s first full-time General Counsel was hired and a Report Review Unit was created.  The Report Review Unit was responsible for reviewing all arrests and case filings to ensure the elements of the crime were included in the report.  This was done to enhance the quality of the reports and the likelihood of prosecution by the State Attorney’s Office.

This was also a time of agency growth.  During his first year in office, Sheriff Staly worked with the Flagler County Board of County Commissioners and the Mayor and City Council for the City of Palm Coast to provide increased personnel to serve a growing city and county. This resulted in twenty-one new positions, the largest employment increase at one time in the history of the agency.  Because of the new resources a dedicated traffic unit was assigned to Palm Coast, civilians provided support for the jail operation, allowing more Detention Deputies to work guarding inmates.  He also started the first full-time Marine Unit and purchased the agency’s first airboat to patrol and respond to emergencies in the marsh areas of Pellicer Creek and the Intracoastal Waterway.  Additional detectives were also assigned to the Investigative Services Division and crime prevention, training and crime analysis units received increased staffing.

Sheriff Staly had a no-nonsense style of leadership and was known to call criminals "dirt bags" and nicknamed the Flagler County Detention Facility the "Green Roof Inn" Sheriff Staly was also known as a hands-on Sheriff or a "Cops’ Cop" and would often assist his deputies at crime scenes, serving arrest or search warrants, personally making arrests and conducting traffic stops or going on one of his usual Friday night patrols, many times with community leaders riding with him.

While he was a no-nonsense law and order Sheriff, he also cared deeply for those who serve in the Sheriff's Office and the community he and his deputies were sworn to protect.  The agency motto was, "An Honor to Serve; A Duty to Protect."  Under his administration the Flagler Sheriff’s Employee Assistance Trust Fund (F.S.E.A.T.) was created to support the well-being of employees during personal and unexpected family emergencies.

Sheriff Staly was a member of Bunnell Lodge 200 Free & Accepted Masons, Past President of the Rotary Club of Flagler County, Past President of Crime Stoppers of Northeast Florida, member of the Palm Coast B.P.O.E. – Elks Lodge 2709 and a member of the Flagler County Gun and Archery Club.  He was on many community boards including the Boys and Girls Club of Volusia/Flagler Counties among others.    Sheriff Staly was also active in Florida law enforcement leadership where he served as a Commissioner for the Commission on Florida Law Enforcement Accreditation and was on the Board of Directors of the Florida Sheriffs Youth Ranches. He was also an active member of the Florida Sheriff’s Association and Volusia-Flagler Police Chiefs Association.  In 2015, United States President Barack Obama awarded Sheriff Staly the President’s Lifetime Achievement Award.

Sheriff Staly worked diligently with the community to increase public awareness of safety and crime prevention with signature initiatives such as “Operation Deadbolt”, hosting a Domestic Violence Awareness Summit in 2017 and cracking down on criminals in Flagler County.  As part of the domestic violence initiative, he assigned a Major Case Detective to focus solely on domestic violence.  Serious about crime, the Sheriff’s Office under Sheriff Staly targeted domestic violence, burglars, driving under the influence, speeding, gangs, fugitives and drugs in a concerted effort to make Flagler County the safest place to live and raise a family.  As a result, the inmate population increased 58% percent.

The agency celebrated its Centennial Anniversary on July 10, 2017 and Sheriff Staly unveiled the Agency's museum to celebrate the Sheriff's Office 100th Anniversary of serving the community.  A time capsule was sealed and placed in evidence to be opened in 2067. Under the guidance of Sheriff Staly, the agency laid the foundation for its next 100 years of service to the community.